About the Scovie Awards

The Scovie Awards evolved from the National Fiery Foods & Barbecue Show after 1996 when the contest was called “The Fiery Foods Challenge.” Originally, it was part of the show and even had a People’s Choice Award that was voted on by the general public. After we discovered ballot-stuffing during the contest, the decision was made to separate the show and the awards, which were renamed “The Scovie Awards” to honor the memory of Wilbur Scoville, the scientist who invented the Scoville Organoleptic Test in 1912 to determine the heat scale of chile peppers. 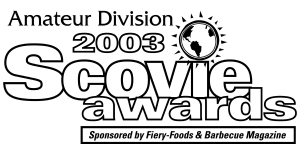 In the early days of the Scovie Awards Competition, we had two divisions, Professional and Amateur. But after a few years of conducting the Amateur Division, we discovered that the entrants were not following proper procedures for manufacturing their products.

After dealing with jars of salsa that either leaked or exploded, we worried about the safety of our judges. So we changed the contest, dropping the Amateur Division and replacing it with the Advertising and Marketing Division. The professional Tasting Division remains to this day.

The Scovie Awards Competition accepts entries for two months during the summer and the judging is held the Monday of the week between the New Mexico State Fair and the Albuquerque International Balloon Fiesta. The judging, which is not open to the public, consists of 80 to 100 judges, mostly food professionals, who sample products in coded cups in what is called a “blind tasting.” They fill out judging forms and rate the products according to eye appeal, aroma, flavor, and heat scale, and the forms are later totaled and compiled by our staff.